When to Use the D86 Beam Width Measurement Method

Explanation of the D86 Method 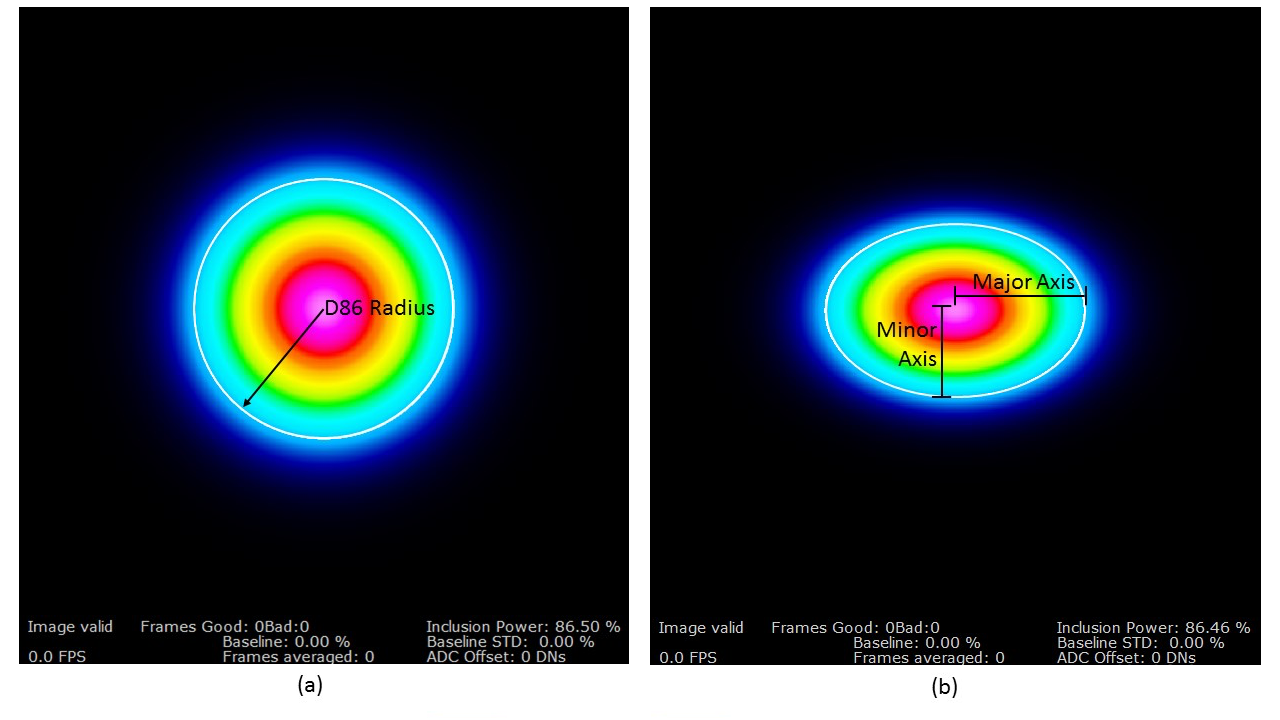 The D86 method of beam width measurement uses a power enclosure, rather than the proﬁle of the beam to determine the beam width. To calculate the width of the beam with the D86 method, a circle (see Fig. 1a) or ellipse (see Fig. 1b) is first found which encloses 86.5% of the total power across the sensor. The D86 method is named after this percentage enclosure. Once the power enclosure has been found, the radius of the enclosure is used as the beam radius (in the case of the ellipse, the major and minor axes are used as the beam radius).

Although the choice of included power can seem arbitrary, the 86.5% value is related to the fundamental TEM 00 Gaussian beam’s 1/e 2 value (13.5%). Other beam measurement methods utilize the 1/e 2 value as well. The clip level method (often used with scanning slit devices) finds the two points where the beam intercepts 13.5% of the beam’s peak power and the difference between these two points is then used as the width. The second moment method—which is the most robust measurement method—calculates the beam width \(w(z)\) with the equation

where \(I(r, z)\) is the beam's intensity distribution. For a fundamental Gaussian beam, the width measured with the second moment yields the 1/\(e^2\) value. Similarly, the D86 method returns the 1\(/e^2\) value for a fundamental Gaussian beam. Even though the various width determination methods return similar values for the fundamental Gaussian, their values diverge for higher-order beams. We generated two beams, a TEM\(_{00}\) Gaussian (see Fig. 2), and a TEM\(_{20}\) Laguerre-Gaussian (see Fig. 3), and used DataRay's software to measure the diameters of the two beams with both the D86 method and the second moment method (see Table 1). The results of the test showed that, as predicted, the two beam width measurement methods return the same value for a fundamental Gaussian, but return significantly different values for the higher-order beams. 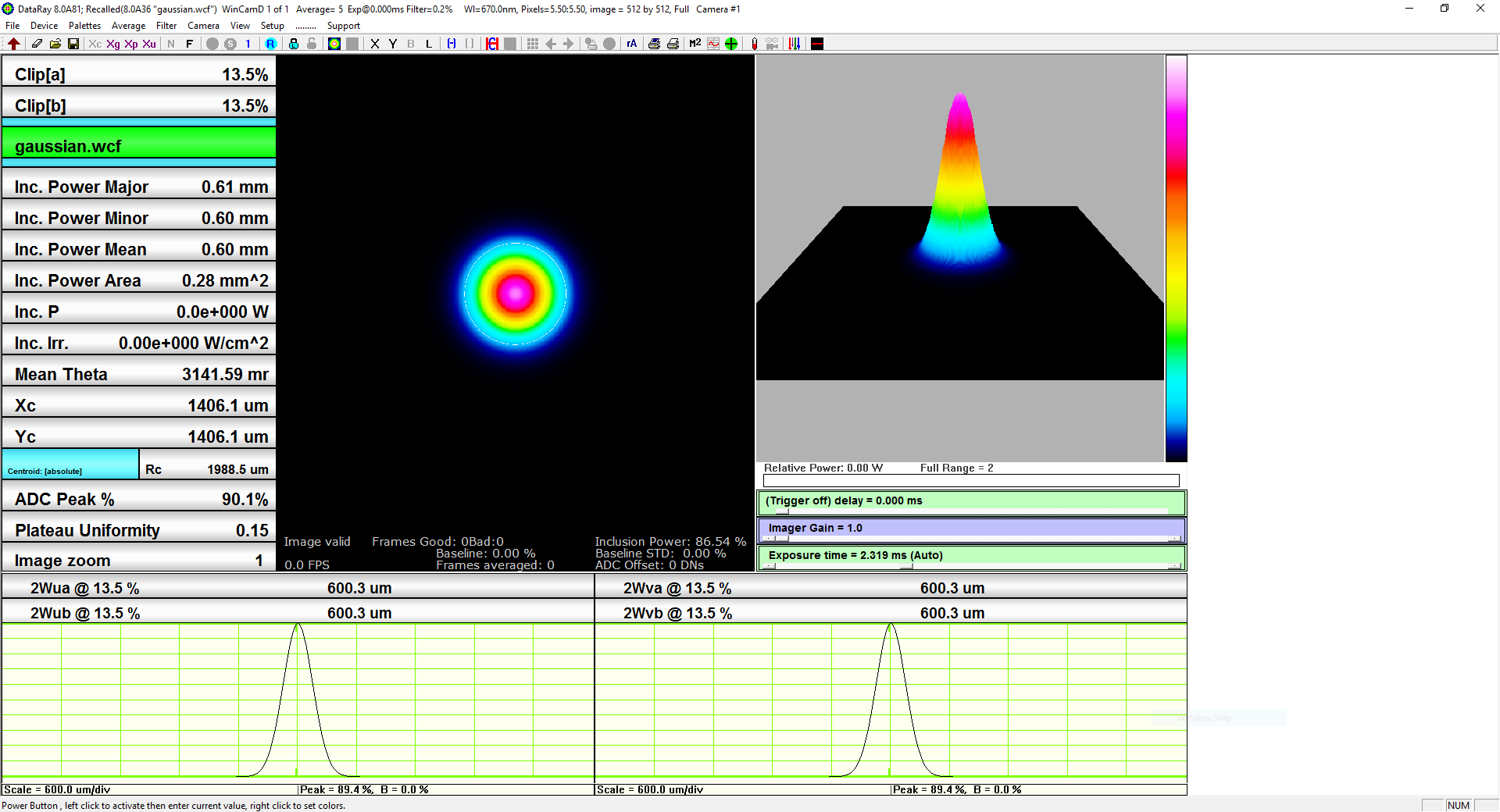 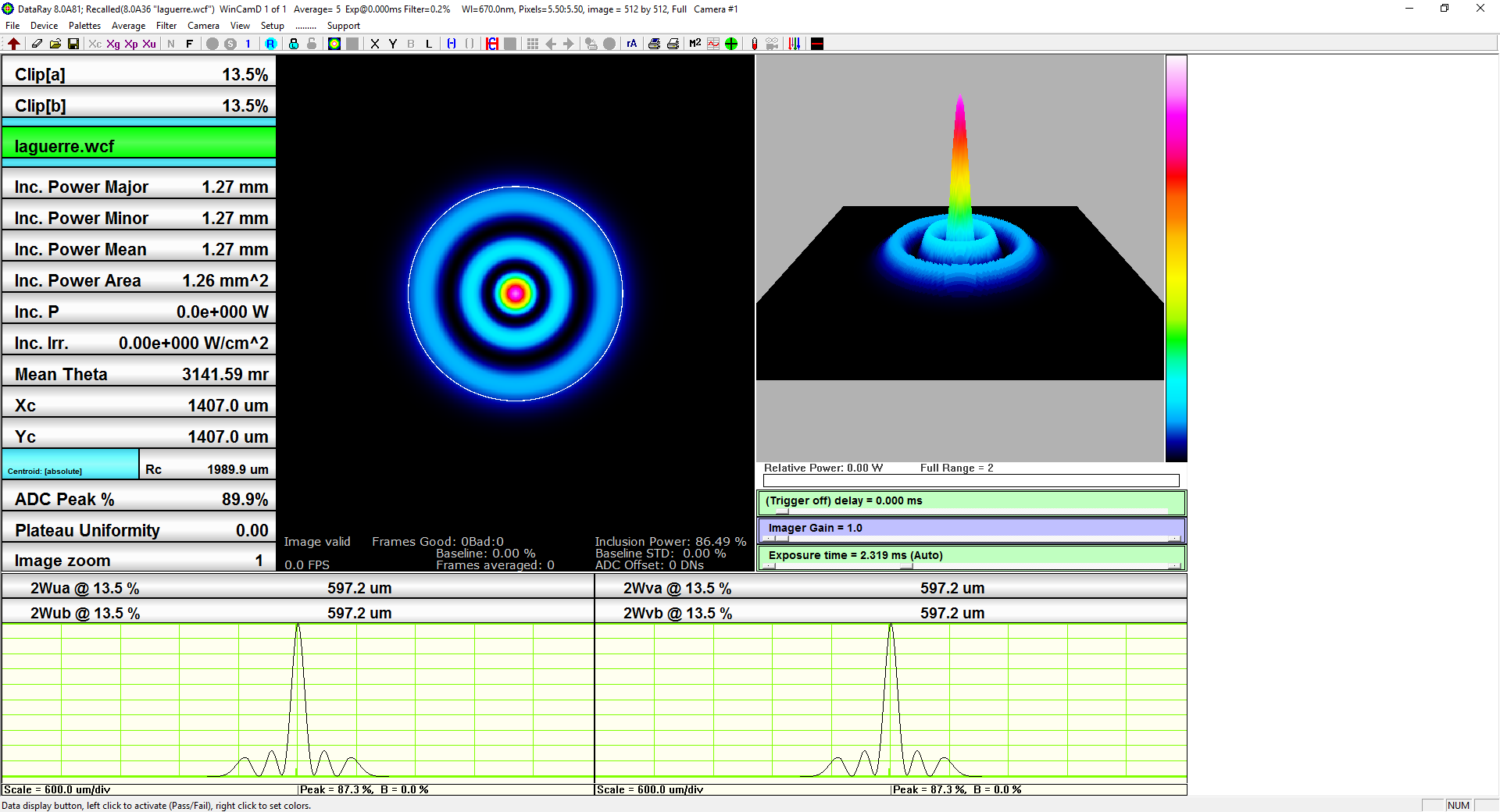 Table 2: Results of measuring the M² value for two simulated beams with both the second moment method and the D86 method.

To use the D86 method with DataRay software, first click Setup on the main menu. From the Setup menu select DXX mode (see Fig. 4a). The buttons on the main screen should be changed to reflect the new mode (see Fig. 3). Next, set the included power percent by selecting Set Included Power Percentage Target from the Setup menu. A dialog box should appear which allows the user to enter the included power target in percent (see Fig. 4b). 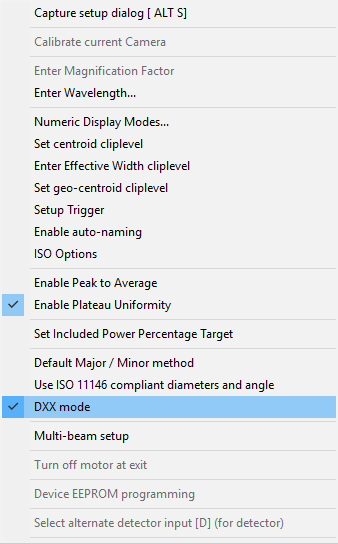 While the D86 method is useful for certain applications, it should not be used as a replacement for the second moment method, due to the difference in beam width measurement values for higher-order beams. If you have any questions regarding beam measurement methods for your application please contact us. We have years of experience in laser beam proﬁling and would love to discuss a solution for your system.